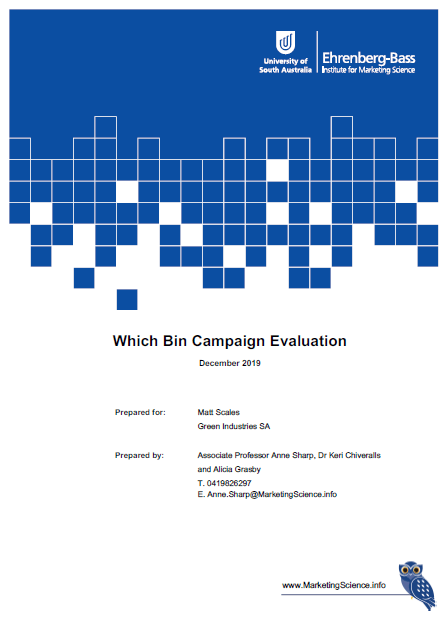 This report details the findings of research undertaken for Green Industries SA (GISA) by the Ehrenberg-Bass Institute, based at the University of South Australia. The research was conducted from September until October 2019. The research assesses the new launched Which Bin campaign in terms of awareness, message outtake and claimed impact on bin system usage. The research provides direction for further campaign refinement and a better understanding of how South Australian householders use their green organics, recycling and landfill bin system. The Which Bin recycling education campaign used social media, press advertising and television commercials. It was supported with public relations and face-to-face community engagement, a 1300 telephone hotline, and virtual ‘helpdesk’ answering ‘which bin’ to use through Facebook, email and a website. Anchored by the character ‘Vin’, a passionate recycler and family members, the strategy was to provide easy access to a range of resources with consistent message. Assets were extended to local councils to customise and adapt for their residents.

Method: This research builds on prior research undertaken by GISA, starting back in 2010. Waste education research was conducted by the Ehrenberg-Bass Institute for GISA in 2010, 2012 and 2014.

The 2019 research consisted of 803 online interviews with householders across South Australia. Because the area of waste management is subject to poor respondent recall and also biases towards respondents over claiming “correct” behaviours, 400 bin inspections were also conducted across the wider metropolitan area. The recycling, green organics and landfill bins were all inspected for visible signs of contamination and best/poor practice. Finally, 10 depth interviews were undertaken with councils and waste educators so that the “Which Bin” campaign’s impact amongst its primary users could be measured.