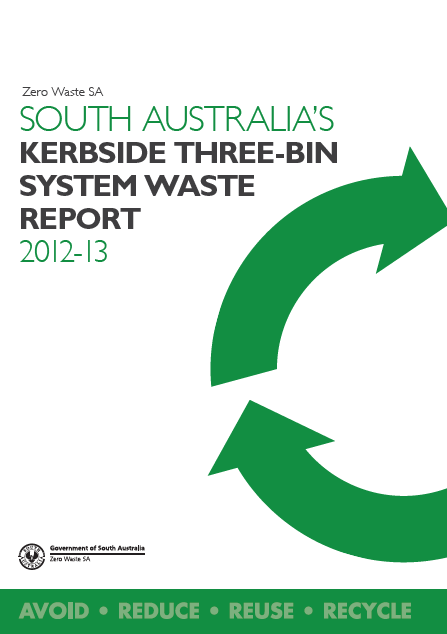 This report presents data and analysis of kerbside waste management and recycling services by South Australian (SA) local government in the 2012-13 financial year. It aims to analyse kerbside waste levels and performance for the community, local, State and Australian governments; and provides a measure of the improvements made by local government in waste disposal efficiency and sustainability. In SA, 77.4% of all waste generated is recovered (instead of going to landfill) over three different sectors of waste - Municipal Solid Waste (MSW), Commercial and Industrial, and Construction and Demolition (Rawtec 2014). MSW is only one of these three sectors, each of which can have an individual recovery rate.

Monitoring changes in the MSW quantities collected is important, as these have an impact on the State’s total recovery rate. The emphasis of this report is on municipal waste collected at kerbside in bins, specifically residual waste (garbage), recycling and green organics, and excludes hard waste quantities, street sweepings, waste collected at drop-off facilities, and council operated commercial services. Data is sourced from councils, waste contractors, the South Australian Local Government Grants Commission, and the Australian Bureau of Statistics. When making comparisons, the information is presented at regional or sub-regional rather than individual council level.

Approximately 666,500 tonnes of Municipal Solid Waste was collected from kerbsides across the whole State: 489,500 tonnes from metropolitan areas, and 177,000 tonnes from regional areas.

Of the 666,500 tonnes of kerbside waste collected: 296,400 tonnes of materials was recovered (approximately 50% organics and 50% recyclables), and 371,600 tonnes of waste went to landfill. The State achieved a kerbside collection recovery rate of 44.5%.

Individual councils do achieve recovery rates of nearly 60% for some months of the year, but the average is lowered consequently due to the seasonal nature of organic wastes produced. As this rate does not include other aspects of MSW such as resident waste drop-offs, Container Deposit Legislation (CDL) beverage containers, hard waste, street sweepings; the overall recovery rate for MSW is much higher (see SA Recycling Activity Survey 2012-13 which estimate the metropolitan recovery rate as 57.5%).