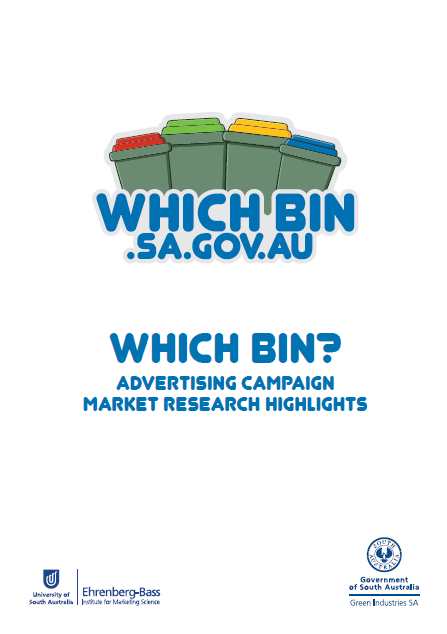 The research assesses GISA’s new Which Bin? campaign in terms of householder awareness, message outtake and claimed impact on bin system usage. The research provides direction for further campaign refinement and a better understanding of how South Australian householders use their kerbside bin system. Which Bin? was funded from the $12.4 million support package announced by the Minister for Environment and Water in May 2018, in response to the impact of China’s National Sword Policy.

It was developed in consultation with a High- Level Education Working Group and informed by a survey of 1,000 householders. The campaign used social media, press advertising and television commercials. It was supported with public relations and face-to-face community engagement, a 1300 telephone hotline, and virtual ‘helpdesk’ answering ‘which bin’ to use through Facebook, email and a website.

Anchored by the character ‘Vinnie’, a passionate recycler and family members, the campaign provided easy access to a range of resources with consistent messages. Assets were extended to local councils to customise and adapt. The Which Bin? campaign is well-liked and has had high cut-through amongst the target audiences. The research has given clear direction for further campaign development and shown the effective reach that has been achieved, using TV and social media as primary vehicles. It is important that these educational messages have consistency and continuity as Mental Availability takes time to build and requires reinforcing as it erodes if not refreshed. This research builds on waste education research undertaken for GISA by the Ehrenberg-Bass Institute in 2010, 2012 and 2014.

Which Bin Market Research Summary (2020)
Download
Back to Resources